Two and a half degrees of separation

Tasmania is well known as a great place for genetic research because apparently lots of family stay here, they don’t spread out like on the mainland. It is also said that we have two heads due to our inbreeding.    That of course is totally untrue, (*pulls scarf over scar*) however, while the rest of the world might only be 6 degrees of separation from Kevin Bacon, here in Tas, the distance between two people is more likely to be 2 1/2 degrees, and the half is most likely a cousin.

Friends from other states are often amazed when someone they just met turns out to be related to someone they already know. Tasmanians tend to take this as the norm. Take today for example. I go to have my boobs squished and the radiographer glances at my address and goes –
Oh you live in  Gumtrees Rd.* When I first moved to Hobart I boarded in that street, in an art deco house on the left hand side. I immediately had an image of the house I thought she meant although she couldn’t remember the number. I didn’t know the name of the people who where there when we moved in 39 years ago. She went on to talk about the woman who lived there and how she ran an illegal book and the phone rang all weekend. She then mentioned that when the woman was away she would go down the street and stay with  Norma* and Albert so she wasn’t in the house alone with the other boarder, a man.

“Norma and Albert were my next door neighbours when I moved in,” I said.

“Norma was my future husband’s (who boarded at the other end of the street) Aunt,” she said.

Of course I thought, and we continued to catch up on some gossip about members of the family I hadn’t seen since Norma had moved North and died (many years after Albert died).

I didn’t have time to get the radiographer’s name and discover how else we might be connected.  There’s a funny story concerning the neighbours though. First, picture the street. Back in 1975 most of the houses were still occupied by the same people who had built them 20 years before, whose children had gone to the local school, and who were now retiring. (20 years later we were still the ‘new’ people in the street.)

When we first moved in Norma was quite abrupt to my mother, telling her that people in this street didn’t have time to chat over the fence all day when Mum tried to say hello.  (Mum had two young children, she certainly didn’t have time to chat.) Funny that 11 years later in one of the many LONG fence side conversations when Mum mentioned we were looking at other places Norma declared we were the best neighbours she had ever had.  For the first 5 or so years we were here Albert never spoke to us, and she couldn’t get away fast enough. One day Dad came in and said he thought he had figured out why the neighbours didn’t like us, they thought he was his brother (who had been involved in some criminal activity and done gaol time – in association with a business that was connected to the business Albert had worked for before retirement.) Albert had apparently spoken to him, and basically admitted that   he ‘wasn’t who we thought you were.” My father and his brother both had the same initial. Mystery solved, except that didn’t explain why they had continued to be very friendly with the neighbour across the road.

You see when we moved in, Mrs P from across the road came across, talked to us kids at the fence line and when she heard our surname mentioned that her daughter had just married someone with the same name. I had to run across and ask Dad, who replied that was his nephew. Yes, that’s right, her daughter married the son of the man the neighbours thought Dad was and so avoided. And they had a son, so Mrs P’s grandson is my cousin. Mrs P has had more contact with his aunts (my 1st cousins) than I have, in fact she was the one who  kept me informed when one was fighting cancer.

Then Kirsty moved in to the house opposite me.  One day (several years later) we were talking about selling houses and she mentioned that her Aunt is a real estate agent, if I wanted her details. No problem I said, my cousin is a real estate agent.  A bit more conversation and she mentioned her Aunt’s company – which just happened to be the same one my cousin worked for.  Yes, this is Tasmania, Kirsty’s uncle, was my cousin’s husband. Mrs P would often babysit Kirsty’s son, so I mentioned one day that technically Kirsty’s son,  Mrs P’s grandson and I were all related. We’re cousins.

Two and a half degrees. Or less. And nearly always a cousin. Welcome to Tasmania.

*Names and locations changed because, well, this is Tasmania!

And just because it was stunning (although I only caught the very end of it, I was driving through the rest), here’s tonight’s sunset.

A creature of habit?

12 months ago Rufus spent most of July in my yard while his foot healed. He is obviously a creature of habit, or else he remembers that the food was good (I supplemented his systematic destruction of my garden with wallaby pellets), because he’s been here most days for the last month, and again yesterday and today.   I don’t think he has become ‘dependent’ upon the pellets (especially as they weren’t offered for 10 or so months), but he certainly has learned what it means when I hunt him down in the yard, wave my closed fist at him and then walk back up to the clothesline lawn. He’s usually there before I get back to the door. If I stay to watch you can see the indecision – avoid human, or eat….. He has learned that “It’s just me” is code for, stop hopping away you stupid creature, I didn’t know you were behind that bush either!

Despite the yard being very very green,  the lawn (which I’ve only mowed a couple of times in the last 18 months!) is rather well trimmed, even the weeds that usually grow around the lemon tree are very low. Nothing is really growing (except the ixias, and apparently they are very yummy!)  It’s been very cold, extremely windy and very wet over the last few days and apart from looking very pathetic sitting out in the storms, he has vacuumed up every pellet offered in moments, showing every sign of being very hungry (although obviously a long way from starving, let’s just call him ‘big boned’.) So this is just to share a few photos and videos from the past couple of weeks.

There’s a Mountain behind him, being covered in snow and it’s raining.

A couple of videos:

Coming up for dinner 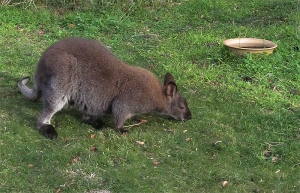 Check out those claws! 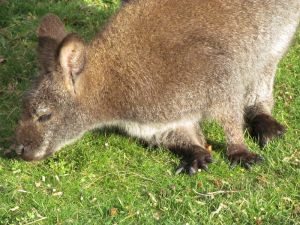 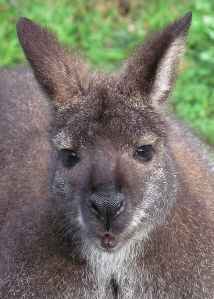