When one door closes…

A neighbour came in the other day. It was COLD, so I had the hall doors closed to keep the heat in the living areas. First time she had noticed the doors. I’m pretty sure she has gone home to plot how to change her hall door, she asked so many detailed questions about the process. When I think about it, it probably is the biggest change I’ve made to the house.

When I took over the house I moved into the main bedroom, the opposite end of the house to my childhood room.  Originally I planned to  let out the 3 spare bedrooms, so the nail salon moved into my new study. I started coming and going through the front door instead of the back door which was closer to the old study and old bedroom. And  when I heated or cooled the house, I’d shut the hall doors to halve the space.  Problem was,  it halved the space visually too.  Visitors were stunned to find out I had more than 1 bedroom.  Despite walking down the full length of the house to get to the door,  most people apparently were quite happy to believe that only the back part existed and that I lived in a small one bedroom unit. Even though I had to go through the hall doors to the bathroom I found I rarely ventured further. It was like a different planet (and it was usually a different temperature too.)

The front hall (yes there’s a front and back hall), as it was for most of my life, varied only by the potted plant or vase of flowers on the hall stand. Master bedroom off to the right of the entrance. 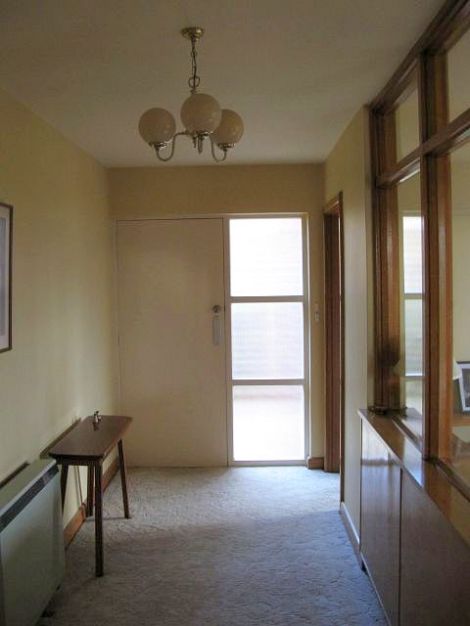 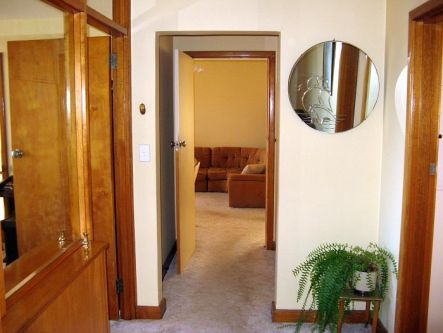 The other end of the hall leading into the living room after I started converting the hall into the library The closed door leads to the living room/kitchen. Open it covered half the DVD shelves, closed you couldn’t open the cupboard. Over the years I spent a fair amount of time trying to get out of the way of that door.

The middle of the hall from the new study/old lounge room which has a glass wall into the hall. The closed door leads to the back hall,  bathroom and sunroom and other bedrooms.

From the other side –  the back hall

The door took up so much space in this tiny hall.

I started out dreaming of a door with glass in it.  I even found some unfinished ones that had 10 panes down the full length. I considered frosted glass and eventually decided I would probably get clear and then frost/etch/or do something to it to obscure the direct view. But doors aren’t cheap, and the new ones were not the right size, they would have to be cut down (of course my doors aren’t standard, the standard came in long after this house.) So I dreamed on and did nothing.

My sister and my best friend both have  bi fold doors in their houses which I have long coveted. But holy cow, the prices! Nearly 3x the price of the cheapest single door.

I mentioned my dream to a client one day who responded that she had 2 spare bi-folds that wouldn’t fit their house. Some measuring and bargaining later and I had 2 doors –  5mm too wide!

They sat in my shed for ages (5mm was not a width I was willing to tackle). I bought the tracks (Nearly twice what I paid for the doors!).

I pulled the doors out and propped them up to see how they would look.

The fake stained glass had to go. I could, I suppose have lived with the red highlights (red is  one colour that does not appear in my  house as a rule), but the kookaburras –  no way. If I wanted doors with pests on them (kookaburras are introduced in Tasmania, not native, and take many native birds from their nests) I’d rather have something furry. Rats maybe. I pulled the glass out and sold it for enough to buy plain glass panels as replacements.

The doors got varnished.

Finally I got a friend’s husband over to trim the 5mm from the middle of the doors, and help install them.

The hall/library now feels like a room instead of a passageway. I can’t wait to be able to replace all the temporary shelves with floor to ceiling built in shelves.

The back hall feels so spacious now you don’t have to walk around the door to get to the toilet.

I love my new doors, feels like a different house. 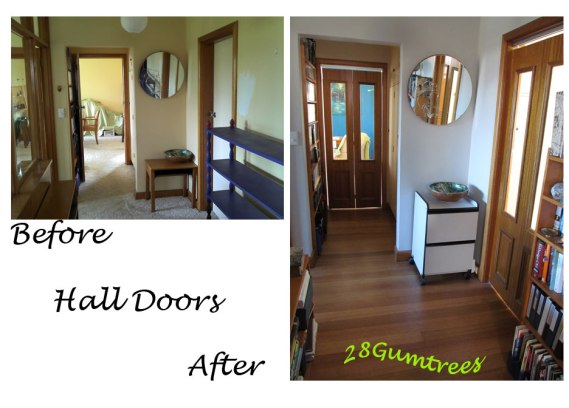 Where observation and imagination meet nature in poetry.